For your viewing convenience, the 2012 World Congress Final Program has been broken down by day.

Systems Approaches to Disease and the Emergence of Proactive P4 Medicine 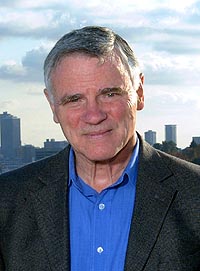 Dr. Hood is a pioneer in the systems approach to biology and medicine. His research has focused on the study of molecular immunology, biotechnology and genomics. Dr. Hood’s professional career began at Caltech, where he and his colleagues developed the DNA gene sequencer and synthesizer and the protein synthesizer and sequencer––four instruments that paved the way for the successful mapping of the human genome and lead to him receiving the 2011 Fritz J. and Delores H. Russ Prize awarded by the Academy of Engineering for automating DNA sequencing that revolutionized biomedicine and forensic science. A pillar in the biotechnology field, Dr. Hood has played a role in founding more than fourteen biotechnology companies, including Amgen, Applied Biosystems, Darwin, The Accelerator and Integrated Diagnostics. He is a member of the National Academy of Sciences, the National Academy of Engineering, and the Institute of Medicine. Of the 6,000+ scientists world-wide who belong to one or more of these academies, Dr. Hood is one of only fifteen people accepted to all three. He is also a member of the American Philosophical Society and a Fellow of the American Academy of Arts and Sciences.

His work has been widely published, and he has coauthored numerous textbooks in biochemistry, immunology, molecular biology and genetics, as well as a popular book on the human genome project, The Code of Codes. He is the recipient of numerous awards, including the Lasker Award, the Kyoto Prize and the Heinz Award in Technology. In addition to having received 17 honorary degrees from prestigious universities in the US and abroad, Dr. Hood has published more than 700 peer reviewed articles and currently holds 30 patents.

Abstract:
The challenge for biology in the 21st century is the need to deal with the incredible complexity of biological systems. One powerful way to think of biology is to view it as an informational science. This view leads to the conclusion that biological information is captured, mined, integrated by biological networks and finally passed off to molecular machines for execution. Hence the challenge in understanding biological complexity is that of deciphering the operation of dynamic biological networks and molecular machines across the three time scales of life—evolution, development and physiological responses. One approach to deciphering this complexity is to generate enormous amounts of information about the systems of interest—across the multiple scales of biological information (DNA, RNA, protein, interactions, etc.). The challenge of high throughput data centers around signal to noise issues—noise that arises both from technical constraints and from the integration of multiple aspects of biology into any measure of phenotype. I will discuss the principles and infrastructure needed to take a systems approach to disease. I will then focus on our efforts at taking a systems approach to disease—looking at a neurodegenerative (prion) disease and a brain tumor (glioblastoma) in mice. We published a few years ago a study on prion disease that has taken more than 6 yr to integrates 6 different types of data and lay out the principles of a systems approach to disease including dealing with the striking signal to noise problems of high throughput biological measurements and biology itself. From these studies come a clear understanding of some of the principal opportunities systems biology brings to medicine and the study of disease. These include: powerful new approaches to delineate disease mechanisms, making blood a window into health and disease, the stratification of diseases into different subtypes so as to be able create an impedance match with effective drugs, a new approach to the identification of drug targets and the ability to analyze multiple organ responses to disease. Then I will discuss the emerging technologies that will transform biology and medicine over the next 10 yr—e.g., next generation DNA sequencing and its applications to human genome sequencing, targeted mass spectrometry, microfluidic protein chips, new approaches to protein-capture agents, single-cell analyses and the use of induced pluripotential cells to understand development, disease mechanisms and stratify disease. It appears that systems medicine, together with emerging technologies and the development of powerful new computational and mathematical tools will transform medicine over the next 5–20 yr from its currently reactive state to a mode that is predictive, personalized, preventive and participatory (P4). I will describe the nature of P4 medicine and its societal implications for healthcare. I will also briefly mention some of the strategic partnerships that we have developed to bring P4 medicine to patients.